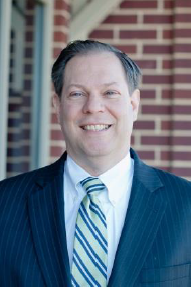 Stephen M. Hladik, Esquire, is a principal in the law firm of Hladik, Onorato & Federman, LLP.  Formerly a Deputy Attorney General in charge of the Harrisburg office of the Pennsylvania Bureau of Consumer Protection, Steve brings a broad range of experience to his mortgage foreclosure, bankruptcy, tax sale and UDAAP legal practice.

A graduate of the Pennsylvania State University, Steve’s interest in history and politics grew into a desire to study law while taking a constitutional law class, among others, as an undergraduate. Steve pursued and obtained his law degree from Widener University, with honors, where he was named Internal Managing Editor of the Law Review.

In addition to his legal practice, Steve was elected to three terms as a School Director on the North Penn School Board, and served as Chairman of the Finance Committee, where he oversaw implementation of a $225 million budget.  Prior to service on the School Board, Steve was a member of the Towamencin Township Planning Commission for six years.

Having been involved since he joined AKL in 1986, Steve served as a Board Member and then the Vice President of the AKL Education Foundation and is currently the Vice President of the National Executive Council of Alpha Kappa Lambda.  Steve was first appointed to the NEC in 1995.  Steve has also served on the Corporate Board for Tau Chapter from 1993 through 1996 and then from 2008 to 2018.

Why run for National President?

As everyone knows, the fraternity world is facing unprecedented challenges.  From COVID to anti-fraternal sentiment, the atmosphere can appear daunting.  The fraternity of Alpha Kappa Lambda, however, has seen tough times before and always made it through.  From World War I, to the Great Depression, World War II, Korea, Viet Nam, and many other national struggles, the Fraternity has always endured.

Part of the reasons our Fraternity endures are two basic ideas: brotherhood and ideals.  People can join many organizations, but few groups have the same type of bond amongst members or the same stated ideals – ideals that can shape, promote, encourage and enhance a brother’s ability to succeed. There is no doubt I would not be where I am today without having been a member of this Fraternity.

Through my time in the Fraternity, I have had the opportunity to meet numerous successful AKL’s, from businessmen, to politicians, judges, government appointees and a host of other professions – all of whom make me extremely proud to be a member of this Fraternity.  However, the most “successful” brother I have known was a simple Quaker from rural Pennsylvania.  Henry Moon pledged in 1936, served as chapter president in 1938 and never stopped serving Tau chapter for close to 70 years.  Henry had a gift in being able to impart to generations of brothers an easy-going but effective philosophy rooted in the ideas behind the Five Ideals: truly get to know your brothers, lend a helping hand whenever needed, lead by example, keep in touch and do your best to spread a little joy each day.

These days it seems like characterizations of fraternities in general would be anything but lend a helping hand, lead by example, and spread a little joy along the way.  Contrary to negative connotations in the press, the Five Ideals are what sets this Fraternity apart and that is why I am running for National President.

I have truly benefited by being a member of this organization, and I enjoy the opportunity to get to know a new generation of brothers, to lend a helping hand to all new members and keep in touch with our growing base of alumni.

As National President, my goals are, first, to work in conjunction with our Vice President of Finance (who is truly gifted in this area) to steady the financial ship as we closely monitor expenses and revenue.  Second, we need to not only contend with financial issues, but we will need to steer our way through life on campus in the COVID era and a life spent meeting and socializing virtually. We will need to formulate plans to best continue the mission as stated by our ideals to help this next generation of brothers in this new environment.  We need to ask the hard question: “What does it mean to be a Fraternity in 2020?”  Third, we need to continue cultivation of our alumni.  Our alumni base is a successful group to be proud of.  This group has significant insights that can benefit our organization.  Fourth, considering this new world of virtual reality, we need to closely examine our goals and how we can effectively deliver for our undergraduate members via new / updated strategic planning.

Issues that we face today are significant, but this Fraternity has survived, and prospered, through immense national tragedy and depression.  I have had the benefit of working with some truly gifted leaders of this Fraternity and have learned a great deal from them all.  I am confident that AKL will endure these challenges like it always has, and I am truly honored to be considered for this position of National President.

*All biographical information was provided for the nomination.*